More than 100,000 smartphone apps are currently categorized as “health apps.” There are apps for physical health—apps that log work-outs, track nutritional intake, and monitor sleeping patterns. And there are apps for mental health—apps that identify your mood, guide meditation and alleviate depression. But can an app tackle a public health problem as serious as teen suicide?

Turns out, mobile phones and suicide prevention may not be such strange bedfellows.

Elizabeth Wharff, PhD, and Kimberly O’Brien, PhD, clinician-researchers from the Department of Psychiatry at Boston Children’s Hospital, specialize in working with adolescents who struggle with suicidal thoughts. Noting that teens are already turning to their phones whenever they need something, they believe a mobile app may be the perfect platform to support them through tough times. Wharff feels that existing apps designed to help with depression and anxiety lack something crucial: parent mode.

Crisis Care has two modes—adolescent and parent—that mirror one another and sync up to reinforce the same foundational coping strategies. While teen mode guides the user through various coping strategies, parent mode has instructions for assisting teens and creating a safe, supportive home environment.

Crisis Care incorporates cognitive behavioral therapy (CBT) techniques, which have been proven to help alleviate depression. CBT is based on the idea that changing the way you think and the way you act can lead to changes in the way you feel. In the “My Skills” section of Crisis Care’s teen mode, users are presented with choices for actions and can choose from relaxation and meditation techniques in the form of videos, audio files or photos. This customization is an integral part of the app’s model. 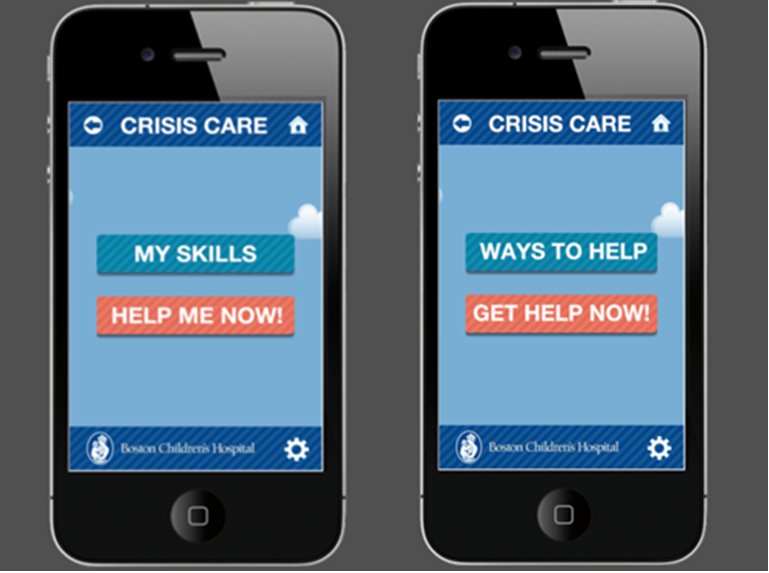 “Patients who feel in control of their recovery do better in those first few weeks post-discharge,” says O’Brien. “In our preliminary pilot tests, one of the most common comments we’ve had from patients is they like being able to personalize the app.” While patients seem to like the video function best, parents appreciate the clear, concise written guidelines for navigating tough situations.

“We envision app personalization being integrated into the discharge process,” says Wharff. “Clinicians, parents and patients can sit together and discuss which songs, photos, videos, etc. will be added to the app. Also, videos can be taken of the patient and uploaded to his or her own phone so that they can essentially teach themselves coping skills when they need a refresher.” For example, the video for “3-3-6 breathing” (breathe in for three seconds, hold for three seconds, breathe out for six seconds) on the app’s prototype features a friend of O’Brien’s. “Ideally, we could video each patient practicing 3-3-6 and explaining how it feels,” she says.

On Crisis Care’s home screen, both parents and teens have the options to either: 1) learn about/ engage in CBT skills or 2) call for immediate help. (In teen mode, “Help me now!” can call parents/guardians, the suicide hotline or 911; in parent mode, “Get help now!” can call the child’s physician, therapist or 911). In the future, the app may also include a link to the Crisis Text Line, the first and only crisis-intervention hotline in the U.S. that facilitates communication exclusively via text messages.

Recent studies support the idea that a majority of teens prefer a technology or text-based behavioral intervention to one conducted over the phone, in person or on paper. This adds weight to the idea that a smartphone-based strategy could be more successful than the traditional care plan for suicidal adolescents.

Wharff hopes to run a formal clinical trial to test Crisis Care against the current care protocols, ideally by incorporating it into the Family Based Crisis Intervention (FBCI), a psychiatric treatment conducted in the emergency room when adolescents present with suicidal thoughts or after an attempted suicide.

Wharff and O’Brien are enthusiastic about the app’s potential and are actively pursuing grants to help turn their idea into a reality.

Teens and parents in the pilot test appreciated Crisis Care’s swift, easy-to-use interface, as well as the customization. “It’s quick with limited options, so you could use it fast, which is paramount,” said one parent. “The app has multiple things that are made for you and fit you as your own person,” said another teen, adding, “What I liked most was that it was very handy and easy-going. If I was in a crisis, I would find what I needed quickly.”