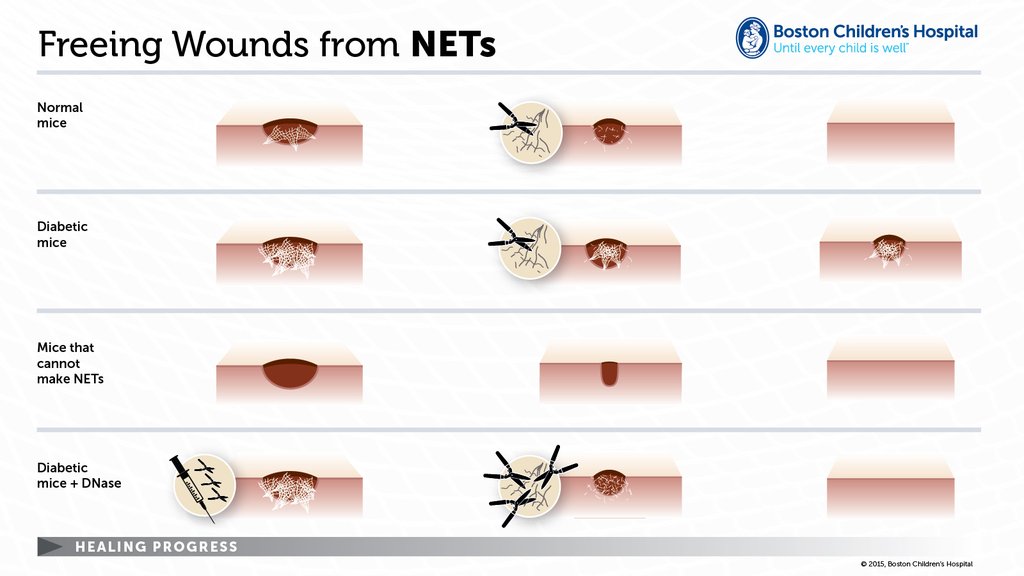 When you get a cut or a scrape, your body jumps into action, mobilizing a complicated array of cells and factors to stem bleeding, keep the wound bacteria-free and launch the healing process.

For most of us, that process is complete in a couple of weeks. But for many people with type 1 and type 2 diabetes, delayed wound healing can have permanent consequences. For example, between 15 and 25 percent of diabetes patients develop chronic foot ulcers. Those ulcers are the root cause of roughly two-thirds of lower limb amputations related to diabetes.

Why don’t these wounds close? Blame a perfect storm of diabetic complications, such as reduced blood flow, neuropathy and impaired signaling between cells. According to research by Denisa Wagner, PhD, of Boston Children’s Hospital’s Program in Cellular and Molecular Medicine, a poorly understood feature of our immune system’s neutrophils may be one more ingredient in the storm.

Neutrophils are primarily known for their ability to eat and digest bacteria and cellular debris. But they have a weird trick up their sleeve: When stimulated, they can unravel and expel their own chromatin—the mix of DNA and proteins that keeps genes packaged in cells—in the form of a dense, mesh-like structure called a neutrophil extracellular trap, or NET.

Why neutrophils do this isn’t quite clear. NETs presumably trap and kill bacteria, but at a cost. Chromatin is toxic outside the cell nucleus, and NETs can damage healthy tissues.

“NETs predispose patients to inflammation, heart disease and deep vein thromboses (DVTs),” says Wagner, who is also the Edwin Cohn Professor of Pediatrics at Harvard Medical School. She has been studying NETs for some years now, particularly as they relate to DVTs. But, she adds, those pathologies are also elevated among patients with diabetes.

Curious to see whether there were any relationships between NETs and diabetes, Wagner, postdoctoral fellow Siu Ling Wong, PhD, and colleagues from Joslin Diabetes Center examined neutrophils from patients with type 1 or 2 diabetes. As they report in Nature Medicine, they found that the cells contained four times the normal amount of an enzyme called PAD4—which primes neutrophils to spit out NETs—and made more NETs when stimulated.

Why are these cells raring to release NETs? The team’s in vitro data suggest that diabetes’ characteristic high blood sugar levels may be to blame. Neutrophils from healthy donors and mice incubated with diabetic levels of glucose were more likely to release NETs than neutrophils fed normal amounts.

To connect the dots, the researchers turned to a mouse model of wound healing, showing that a) NETs are indeed present in wounds on normal mice; and b) mice made diabetic with a drug called streptozotocin had more NETs in their wounds and healed more slowly than normal mice.

As long as the mice had PAD4, that is. Diabetic mice engineered by Wagner and Wong’s colleagues at Pennsylvania State University to lack the enzyme—meaning they couldn’t produce NETs—healed much more quickly than ordinary diabetic mice and at a rate similar to healthy, PAD4-deficient mice.

To see whether physically cutting NETs might have the same effect as preventing them, the team treated mice in the wounding model with DNase 1, a DNA-cleaving enzyme that cuts up NETs. Sure enough, DNase 1 accelerated healing in both normal and diabetic mice but had no discernable impact on healing in mice that lacked PAD4.

Wagner envisions NETs in a wound like tree branches in a stream. Too many branches and items can’t flow through the stream, clogging it. NETs, she thinks, may keep a wound from healing by tangling up new skin cells as they try to migrate into the wound. No cells, no growth of new skin; no skin growth, no healing.

She also thinks that NETs may be redundant as a means of antimicrobial defense.

“We don’t fully understand the functions of NETs, but all of the other antimicrobial functions of neutrophils are preserved even if they cannot make NETs,” she says. “Any injury that causes inflammation will result in production of NETs, and we think that if the injury involves skin repair, NETs will hinder the repair process.”