When Sarah and Jon Morris’ twins were born nine weeks early, they embarked on a journey largely dictated by their children’s medical needs. While son Drew was thriving, daughter Emma was severely compromised and was transferred to Boston Children’s Hospital’s Neonatal Intensive Care Unit (NICU). “We felt powerless,” remembers Jon. “Every time we thought we had made progress, we had a setback. It’s always two steps forward, one step back in the NICU. That backwards step always hit the hardest.”

After 296 days at Boston Children’s, Emma went home tethered to breathing and feeding tubes. The Morrises had a pulse oximeter at home to regularly test Emma’s blood oxygen level.

There were frustrating limitations to Emma’s oximeter: END_OF_DOCUMENT_TOKEN_TO_BE_REPLACED

Sepsis is the most common cause of death in infants and children worldwide, and its incidence is increasing. Damage is caused not only by the bloodstream infection itself but by the systemic inflammatory cascade it triggers — which has been difficult to control without also causing long-lasting immune suppression. During a five-minute Ignite Talk at the 2015 Boston Children’s Hospital Global Pediatric Innovation Summit + Awards, Brian McAlvin, MD, a critical care intensivist at Boston Children’s Hospital, introduced the audience to a filtration technology that could cure systemic inflammatory response syndrome (SIRS).

SIRS, McAlvin noted, is the underlying mechanism for a variety of diseases, not just sepsis. His invention, the Antibody Modified Conduit, is essentially a small tube with antibodies painted on the inner surface that recognize and remove the inflammatory agents. “This technology allows us to choose the inflammatory molecules in the circulation,” says McAlvin, “and take them out of the blood as the condition evolves by changing the antibody that’s present.”

The talk won the pitch competition, earning McAlvin an Apple watch, a one-on-one mentoring session with an influential venture capitalist and a meet-and-greet with Boston Children’s innovation acceleration team, VCs and other stakeholders.

Since we spoke with the founders of TriVox Health in 2014, their disease management program has taken off. The program began in Boston Children’s Hospital’s Division of Developmental Medicine as a way to more efficiently collect information on children’s ADHD symptoms from parents and teachers. It is now a user-friendly, web-based platform for tracking multiple conditions, incorporating medication confirmation, side effects reporting, disease symptom surveys and quality of life measures.

Vector sat down with founders Eric Fleegler, MD, MPH and Eugenia Chan, MD, MPH to learn about TriVox Health’s rapid growth over the past year, and what their plans are for the future. END_OF_DOCUMENT_TOKEN_TO_BE_REPLACED 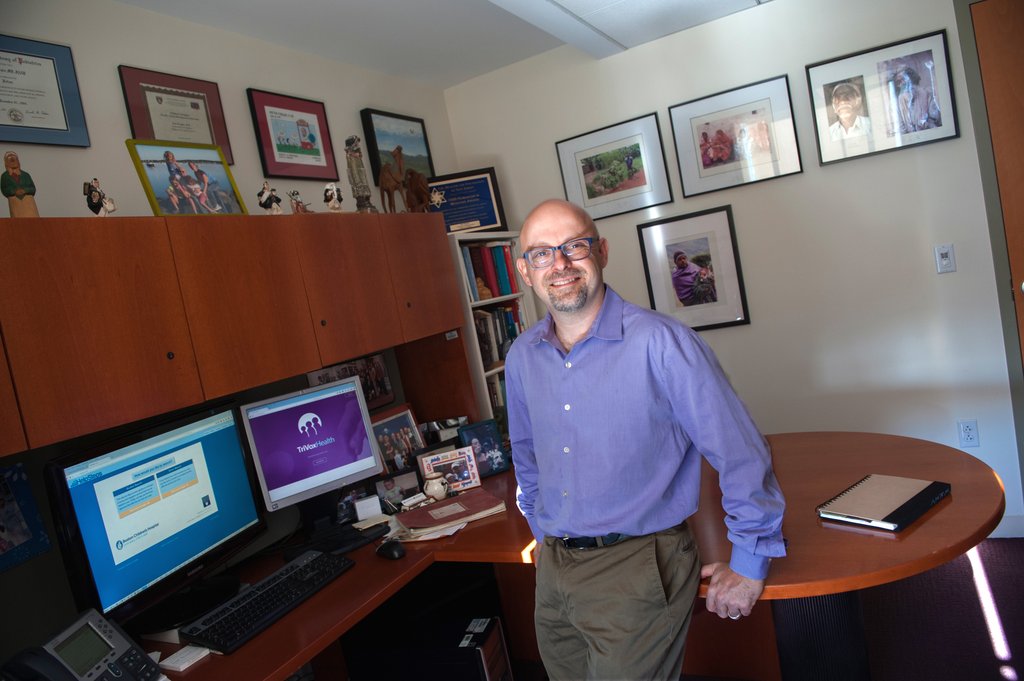 Emergency medicine physician Eric Fleegler, MD, MPH has been everywhere from Malawi to Rio de Janeiro making an impact and collecting experiences that inform and inspire his work. His insatiable curiosity for the world around him can be seen in the objects that adorn his office as well as in his bedside manner. “I talk to all of my patients about where they’re from because I care, and because nothing connects more than people being interested in who you are, not just your disease.”

Fleegler splits his time between treating patients, co-directing the hospital’s sedation service, developing the disease management system TriVox Health and publishing research on topics such as gun violence. “I feel totally at home in pediatric emergency medicine,” says Fleegler. “The thing I love most is being able to connect with patients who are scared and worried and make them know that it’s going to be OK. How you talk to people is a part of any good doctor’s care. We have to care for our patients holistically.”

Scroll over the items around Fleegler’s office to learn more about his life, work and innovations.

Apple Has Plans for Your DNA (MIT Technology Review)
Apple is collaborating with U.S. researchers to help launch apps that would offer iPhone owners the chance to get their DNA tested.

Why Your Future Vaccination Might Not Be A Shot (NPR)
Mark Prausnitz – a professor at Georgia Teach – is collaborating with the CDC and a group at Emory University to create an “ouchless” bandage-like vaccine.

Splice of life (Nature)
In light of the recent news that Chinese scientists genetically modified human embryos, the author calls for transparent discussions on the risks and ethics of editing human embryos. END_OF_DOCUMENT_TOKEN_TO_BE_REPLACED

While studying quality of care in the 1990s, Mark Schuster, MD, PhD found that few studies on pediatric quality had been conducted. The typical explanation that he was given was that the federal government wasn’t funding research into quality measures because children on Medicaid don’t drive federal health-care costs nearly as much as adults on Medicaid and Medicare do.

But Schuster, chief of General Pediatrics at Boston Children’s Hospital and William Berenberg Professor of Pediatrics at Harvard Medical School, believes there have been other challenges in measuring care quality in children. In an acceptance speech upon receiving the 2014 Douglas K. Richardson Award for Perinatal and Pediatric Healthcare Research, published today in the journal Pediatrics (PDF), Schuster points to factors including the relative rarity of many pediatric conditions and that many of the benefits of excellent pediatric care are not observed until adulthood. END_OF_DOCUMENT_TOKEN_TO_BE_REPLACED