“It’s a brutal disease; there’s just no other way to describe DIPG,” says Steve Czech. “And what’s crazy is that there aren’t many treatment options because it’s such a rare, orphan disease.”

Czech’s son, Mikey, was diagnosed with a diffuse intrinsic pontine glioma (DIPG) on Jan. 6, 2008. It was Mikey’s 11th birthday. The fast growing and difficult-to-treat brainstem tumors are diagnosed in approximately 300 children in the U.S. each year.

Sadly, the virtually incurable disease comes with a poor prognosis for most children. The location of DIPG tumors in the brainstem — which controls many of the body’s involuntary functions, such as breathing — has posed a huge challenge to successful treatment thus far.

“Typically, they give kids about nine months,” says Czech. “Our lives changed forever the day that Mikey was diagnosed.” END_OF_DOCUMENT_TOKEN_TO_BE_REPLACED

Based on their discussions with their peers, these are their key takeaways from the meeting:
END_OF_DOCUMENT_TOKEN_TO_BE_REPLACED

Childhood cancers are rare and account for about one percent of U.S. cancer diagnoses. They differ from adult tumors in that they often arise from many more diverse kinds of cells, including embryonal tissues, sex-cord stromal cells of the ovary or testis, the brain’s neural and glial cells and more.

Yet although improved tumor detection and treatment have increased survival rates for many different cancer subtypes, more than 1,900 children across the U.S. still lose their battle each year.

A new dataset — comprising the genomic profiles of a huge array of pediatric tumors — could help change that. END_OF_DOCUMENT_TOKEN_TO_BE_REPLACED

Precision cancer medicine – the vision of tailoring diagnosis and treatments to a tumor’s genetic susceptibilities – is now ready to impact the care of a majority of children with brain tumors. The molecular “signatures” of brain tumors were first characterized in 2002 in a study led by researchers at Boston Children’s Hospital. This has led to the creation of new tumor subgroups and changes in cancer treatment: For example, a current clinical trial is testing the anti-melanoma drug dabrafenib in a variety of brain tumors with the same BRAF mutation – including metastatic anaplastic astrocytoma and low-grade glioma.

In the largest study of its kind to date, investigators at Dana-Farber/Boston Children’s Cancer and Blood Disorders Center genetically tested more than 200 brain tumor samples. They found that many had genetic irregularities that could guide treatment, in some cases with approved drugs or agents being evaluated in clinical trials.

For some pediatric cancers, such as acute lymphoblastic leukemia, older forms of therapy — and older ways of defining who receives which therapy — have served well over the last few decades. But that approach is no longer sufficient. Revolutionary gains have been made in adult oncology using personalized genomic therapy — therapy based on matching treatments to the genetic makeup of a patient’s tumor. The time has come to take them to the pediatric space.

“It’s all about the patients,” says Katherine Janeway, MD, when asked about the motivations behind her efforts to bring precision medicine to pediatric oncology. But it’s more than that; the drive to combine science and care is in her blood. A solid tumor specialist and cancer genomics researcher at Dana-Farber/Boston Children’s Cancer and Blood Disorders Center, Janeway is the sixth generation of her family to choose a scientific or medical path—not just as a career, but also as a form of service.

Janeway will bring her patient-centered perspective to the Cancer Genomics + Care panel at Boston Children’s Global Pediatric Innovation Summit + Awards 2015. Read more about her life, work and innovations—and inspirations—by hovering over the objects that surround her everyday. 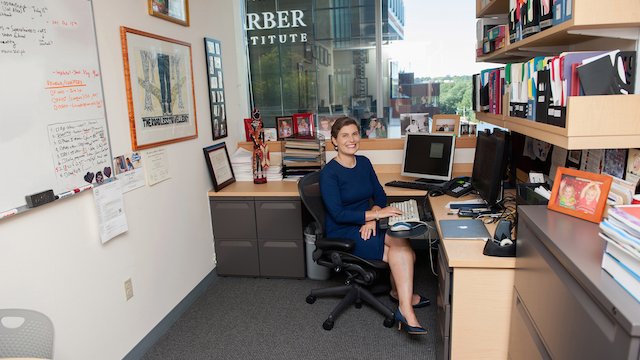 Learn more about the Boston Children’s summit and register to attend.